Last year I did this as a collection of YouTube videos. I’m going with a slightly different approach this year: a playlist through Grooveshark, one of my favorite streaming websites. This is some of my favorite rock and pop music of 2010. It follows no particular order or pattern other than “the order I ran across them while reviewing stuff I had bookmarked.” Some patterns I’m noticing when I look back through my favorite music of the last year:
1) The country-rock California sound of the early 70s is coming back. Not sure how I feel about that.
2) I predict that 2011 will be the year of newgaze, a shoegazer revival. I feel VERY happy about that.
3) We’re past due for a game-changer like the British Invasion, punk, or grunge. I don’t think it’ll happen next year, but soon. Soon.
4) I’m still not tired of bands breathing new life into New Wave sounds.

I hope you get some enjoyment out of the list. Comments welcome!

Back at NSU in Natchitoches, I was friends with a woman named Sandra. We both left town in the mid-90s, and as happens so often these days we recently friended each other on Facebook. I just realized something last night–there was a time when we were both living in Vermont, not 10 miles from each other, and neither of us knew it. When I was living and working in Barre, Sandra was going to Goddard College in Plainfield. We live in the village now, in an apartment overhanging the river.

View of Plainfield from the bridge

I love finding these weird connections–mutual friends who worked together in a different state, the woman from Lafayette I met on a bus route who knew Ezzie, a friend’s S.O. who went to high school with an old musician buddy. Just makes the day a little brighter.

I met Aaron Flinn through John; I think the first show I saw in Vermont was Aaron playing somewhere around Waterbury, though I’m damned if I remember where that was. Aaron’s been writing songs, playing acoustic solo sets, and performing with his band Salad Days for more than 15 years now. He’s got an energy and commitment in his songs that pulls the listener along for the ride. I think he’s one of the best, little-known AAA artists working New England, and I know he’s a damn fine guitar player; give him a listen.

Blogged with the Flock Browser

I’ve known John Voorhees more than 20 years now. The beard grows, shrinks, gets shaven off, and grows again, but John’s lyrical skills grow steadily longer, unshaven by the rusty razor of crass commercialism (or something). I think he’s gotten better as he’s aged; some of his most recent songs are just heartbreaking. He’s solidly in a Phil Ochs singer-songwriter tradition, often just him and a guitar, and when music’s that stripped down it’s got to mean something or you’ll know it right away. And on top of that, he’s just a great guy. For a few of his best songs, try “Fiesta Time,” “The Best War,” and “Undercover Maggie.”

Thought about this just this morning, just felt like coming up with a series of completely non-holiday related posts. I want to talk about some of the talented artists I’ve had the pleasure of knowing in my life. First up: the Shreveport band Dirtfoot. I went to college with Jason Bratlie, the cool, mellow banjo player of Shreveport band Dirtfoot. I like their sound. A LOT. They’ve got a gritty bluegrass boogie going on that reminds me of Frank Zappa’s groovy side. They’ve been featured on Louisiana Public Broadcasting, put out some damn find recordings, and are going to be touring with the Rev. Horton Heat come February. Most recently, their last album hit #9 on a roots rock chart. Give ’em a listen, and let’s hope they do more touring far and wide.

With the pronunciation emphasis on CON. Suri and I are doing one big Christmas present for each other: a Playstation 3 console system. I just picked it up and got it running with next to no trouble. I’d read some conflicting information online, so I was glad to see that it came with built-in wireless. The PS3 hooked up to my WLAN with no muss and fuss, just started going right away. It’s good to have a sparkly clear hi-definition gaming system! Colors are very bright and details come through very well indeed. The first two games we have are LittleBigPlanet, which Suri has played before, and a cool action game called Uncharted: Drake’s Fortune. Suri’s been enjoying it so far for the most part, but I’m looking forward to being able to really settle in with games and try to develop some skill with a game controller.

I want to talk about characters for survival horror. These aren’t the hotshot cops of Lethal Weapon, the spies of The Bourne Identity, or the soldiers of Aliens. I’m thinking here of Barbara, the frightened young woman from Night of the Living Dead; Jim, the injured bicycle courier from 28 Days Later; Heather, the teenage daughter in Silent Hill 3. These are everyday people thrust into terrible circumstances–isolated from civilization, threatened by deadly supernatural foes, lacking useful gear, ill-prepared to handle the sudden collapse of the world around them.

Then there are survival horror characters in roleplaying games like All Flesh Must Be Eaten. These can be the same kind of everyday schmoes who barricade themselves inside a shopping mall in Dawn of the Dead. They can even be mystically gifted, destined to lead the human resistance against evil. For gaming purposes, I much prefer survivors: people with a regular, everyday existence who hold some edge that lets them cope with sudden danger and violence.

If you make roleplaying characters too powerful, it’s no longer really survival horror. It becomes an action story with zombies instead of Nazis. Characters that are too weak can lend themselves well to entertaining play for a while, but they’re basically Happy Meals with legs. Survival horror requires isolation and danger, and regular folks can’t plausibly survive long under the stresses that horror survival demands. Given the suggestion of one of my players, I’m going to give folks a little more structure for making their characters.

One thing to dislike about December: the lack of opportunity to roleplay. It’s hard enough to get grownups from three or four separate households together for several hours at the best of times. Add in travel, cocktail parties, shopping, wrapping, the post office, and office parties and it gets nigh-impossible. We’re smack dab in the middle of a fun game of the Committee for the Exploration of Mysteries–not something we wanted to take a long break from, but it’s the way the chips fell. I’m also running an occasional Trail of Cthulhu game for friends in Jericho. It’s going well, though more slowly than I would have thought. I even have folks specifically asking me to run a game of All Flesh Must Be Eaten, so I need to work with them to figure out how far along the zombie apocalypse has gotten when our game begins.

All this cornucopia of specific games I’m trying to fit in is occupying the portion of my brain that’s usually taken up by dreams of games I might never run. That’s not a bad thing, but it feels odd. I usually have at least two games that I’m absolutely DYING to play, but that for one reason or another may never come off. On some level I know that I want to try Blowback, Day After Ragnarok, and The Kerberos Club. Unusually, I’m NOT writing up sample characters and adventures while I watch TV at night. And oh yeah, there’s all those games I already play in or have run before! Uncreated, cliffhangers, Harn, steampunk, Transhuman Space, even the abortive Blue Rose campaign of a few years back. I guess having a specific outlet for things this immediate enough is so unusual that I’m not quite sure how to handle it.

This week I finished the single-player campaign for Call of Duty: Black Ops. The Call of Duty games have been my favorite first-person shooters for some years now. Some elements of the game are completely unrealistic arcade-like concessions–in particular, you can take an astounding number of bullets and be fine in mere seconds as long as you get to cover and avoid taking damage for a bit. But other aspects of the game emphasize realism. The graphics are beautiful and textured even when showing the ugliness of war, different weapons behave in different ways in your hands, the characters are well-voiced and believable. I was fully prepared to not enjoy the game at all. Treyarch was the studio in charge of this edition and they’ve made some dull, sub-par games in the past. This one completely redeems it.

First, there’s the plots. Black Ops is set between the World War 2 shooters and the Modern Warfare series, following a CIA wetwork agent on covert missions in the 1960s. Havana during the Bay of Pigs, a Soviet prison, an American army base under attack in south Vietnam, a cosmodrome on the Kazakh steppes, the jungles and tunnels of Vietnam, and more–the landscapes lend great atmosphere to the different missions. 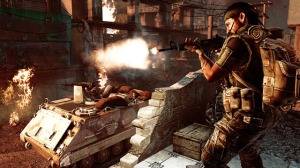 Then there’s the gameplay. Unlike Treyarch’s World At War, I rarely felt funneled into one preset path to get to a location. When I did, usually in vehicle chases, I was given a brief driving game to concentrate on, or a cool new weapon to try. While the AI is not as polished as it could be, it does a better job than many shooters. I really felt like those electrons were out to get me.

If you’ve been wondering whether to get the game, maybe because of disappointment with the CoD games not produced by Infinity Ward, give it a try. Black Ops should be at the top of every FPS fan’s Christmas list.

So my playset took second place in the contest! I won, and I quote, “30 geekgold worth of tax-free wampum from the RPG Geek casino for his excellent playset. No comment from Ward Churchill as yet.” I know it was a small contest for a particular niche of a shrinking hobby, but it’s still a rewarding accomplishment. See earlier blog entries if you have questions about the Fiasco RPG, or if you have no idea what I’m talking about.

litlblog: Music in an age of plenty
Blog at WordPress.com.