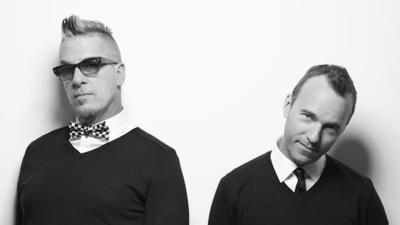 There’s a new album out that should be getting more love. The Regining Monarchs play 60s-style instrumental rock at its most fun and confident on their debut album Black Sweater Massacre. The dominant sound is frenetic surf guitar à la Dick Dale, but strains of ska, exotica, and rockabilly make their way in as well. “Tanya Donnelly” sounds like the alt-rock goddess herself jamming with an invigorated Herb Alpert; the ska-flecked single “Murder Your Summer” deserves to be the titular song of a grindhouse movie; and the slow-burning “Steakhouse” is a slow-burning dreampop noir tune that makes great use of tension and unexpected turns. The band’s pedigree is interesting. One guitarist, Greg Behrendt, is a successful stand-up comedian; the other, Michael Eisenstein, was in archetypal 90s rock band Letters to Cleo. The L.A. band funded the album through Indie Go Go and hasn’t been together that long; you’d never know it to listen. Very solid stuff and I think I’ll be turning to it a lot in the coming months. Listen to the whole album for free here.

First off I’d like to acknowledge that this post was inspired by the amazing work over at The 120 Minutes Archive. The contributors there lovingly went through every recorded episodes of 120 Minutes, created tracklists, and–with very few exceptions–linked to online copies of the music videos. So–wait a minute, what was that sonny? Come closer. “What was 120 Minutes, you ask?” Well, pull up a chair while your grandpappy tells you the story.

By the mid-1980s MTV was flying high. They’d made a cultural impact out of all scale with their budget and the station was the impetus for a lot of kids to beg their parents for cable. But most of the time the stuff they showed was, frankly, repetitive and eye-rollingly dull. The ratio was something like 1/3 hair metal (Ratt, Twisted Sister), 1/3 commercial R&B (Bobby Brown, Janet Jackson), and 1/3 pop (Madonna, Mr. Mister). To round things out MTV aired specialty shows like Headbangers’ Ball for metalheads and Yo! MTV Raps for hip hop kids. For fans of progressive, punk, new wave, the music that would later be known as alternative, there was 120 Minutes. It aired quite late once a week on Saturdays–11 at night until 1 in the morning IIRC. Sometimes it would be hosted by a veejay, but sometimes it’d be an alternative artist just starting out–I remember episodes hosted by the Sugarcubes, Mojo Nixon, They Might Be Giants, and the singer from the Stone Roses.

The show was revived a few years back but as of now it’s canceled again. It’s not suprising; MTV has just been a youth programming channel for more than 20 years now, with music videos an occasional afterthought. But it’s hard to overstate how formative 120 Minutes was to me growing up in the rural south. It was a link to a wider world of culture, a reminder that all over the world there were kids like me who loved Siouxsie Sioux, the Dead Kennedys, New Model Army.

All this to say that I miss the chance to sit down every so often and just watch good alternative music videos. In case any of you feel that way too I put together a YouTube playlist of some great music videos from this year. Note that if you have a modern gaming console you can probably view these right on your television. Sit back with a friend or two, watch some videos. Skip the ones you don’t like, talk about the ones you do. Enjoy.

Adorable indie folk singers are thick on the ground. You could be forgiven for seeing the scalloped collar and catseye glasses in that pic and consigning Gledhill to the ukulele legion. But she’s got a lot going for her and I hope this album helps her break out of the pack.

First and foremost there’s the production. It sounds slick and bright, but remains honest–Gledhill and company know when to break out the mellotron and triangle and when to keep it simple. It’s a sound reminiscent of the La’s, Feist, or Sixpence None the Richer. And then there’s Gledhill’s lyrics. She and these songs are constantly, almost relentlessly optimistic: witness “I draw doodles of eccentric faces in the margin spaces of important papers / Then I hand them in with a comedic grin” in the title track or the following passage from the impossibly catchy “Trouble No More.”

If you’re looking for some fun, gentle, folky pop then check out the self-released Pocketful of Poetry. The world needs more music like Mindy Gledhill’s.

Something I love about living in Vermont–close proximity to great live music. I’ve been shilling Angélique Kidjo’s music for more than 20 years, ever since I had a world music show on KNWD in Natchitoches. I was thrilled to see her perform last week at Middlebury College. Her voice is just astonishingly strong–clear and pure-pitched and powerful even as she dances all over the stage.

That’s a clip of her from some years back and she’s only gotten better with age. She grew up in a musical family in Benin and honed her craft in Paris, bringing American R&B and Brazilian rhythm to fantastic African pop. Kidjo has a boundless energy and positivity that embodies the best of what world music means.